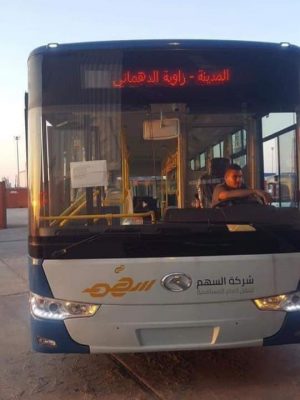 The first batch of 35 ‘‘City bus’’ models for the new public transport network in Tripoli arrived from China at Tripoli port last week and were released on Sunday, operators Asahem Company for Public Transport said Sunday.

The Asahem said it will announce shortly when operations will commence and that buses are expected to start operating trial runs in mid-September and routes will be introduced gradually.

It also reported that the buses carry 40 seated and 20 standing passengers and were fully air conditioned. They are also fitted with 5 cctv cameras linked to a central control room and are fitted with a satellite tracking system.

The buses also have 3 exterior LED panels indicating their number and destination an area designated for people with special needs, the elderly and children, as well as bells to request a stop at a bus stop.

Drivers will wear a uniform and no load music or smoking will be allowed on board, the company added.

If these buses do indeed go into operation, it would be the first time public buses have operated in the capital for about 20 years.

It will be recalled that on 26 March this year, as reported by Libya Herald, Libya signed a contract to import a possible total of 130 buses from China’s King Long company.

The contract was signed in Tripoli by Asahem Company for Public Transport, a subsidiary of the National Investment Company (NIC).

Asahim is the importer and will operate the buses which will initially be for Tripoli.

The company had reported that it expects to expand its services to other Libyan cities.

It will also be recalled that Libya had announced plans for a public metro / underground system for Tripoli and Benghazi. The project has been stalled for decades.

Libya did make a start on its railway system, but the 2011 February revolution brought a halt to the project. A Chinese and a Russian company had been awarded, and started work on sections of the railway project.