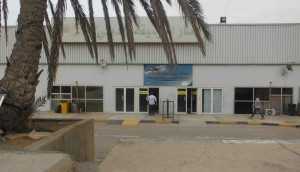 The Tripoli Ministry of Health aligned to the Faiez Serraj-led Presidency Council and Government of National Accord condemned on Sunday what it called the ‘‘systematic and repeated attacks on civilian facilities, residential neighbourhoods and citizens that have put thousands at risk, displacement and death’’.

The Ministry stressed the seriousness of these acts, which it said are considered war crimes in accordance with domestic and international humanitarian law, and called on the concerned authorities to act to bring the perpetrators to justice.

The Ministry did not name who it considered the perpetrators to be, but it is widely assumed the act was conducted by the Khalifa Hafter-led Libyan National Army (LNA).

There have been a series of alleged strikes on civilian targets in Tripoli since Hafter launched his attack on the capital on 4 April. On Saturday there was another attack on Mitiga Airport, Tripoli’s only operating airport.

A passenger known to this newspaper was at the airport at the time and reported that the air strike was a big strike which caused panic among passengers who fled the terminal building as smoke filled the air causing a major panic.

The attack happened as two civilian planes was landing and led to the temporary suspension of flights for a short period of time.