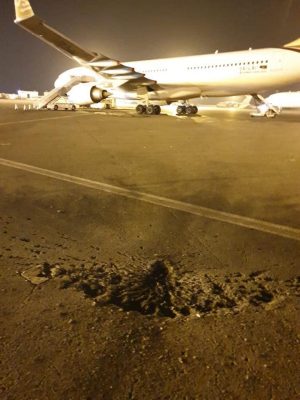 The Serraj government and UNSMIL condemned Saturday nights’ attack on Mitiga airport that had led to civilian injuries and infrastructure damage (Photo: PC/GNA).

The internationally-recognized Libyan government led by Faiez Serraj and the United Nations condemned Saturday’s attack on Mitiga airport which led to civilian casualties. The attack was attributed to the Khalifa Hafter forces attacking Tripoli.

There was some minor damage to infrastructure, parked cars and shrapnel damage to one aircraft. The Serraj Health Ministry reported four civilian injuries, including 3 pilgrim passengers (a woman and two men) and another civilian were taken to Mitiga and Central Tripoli hospitals, while another 30 pilgrims who had fainted and experienced high rates of blood pressure and diabetes as a result of the panic – were also admitted to hospitals.

The civilian injuries occurred because the attack on the airport coincided with the landing of the Libyan Airlines flight upon its return with pilgrims from Saudi Arabia.

The Serraj government condemned the attack attributed to ‘’Hafter’s militias’’ in the strongest terms. It said that ‘‘This repeated terrorist action is only carried out by those who are devoid of humanity and religious principles and undervalues Libyans’ blood’’.

It called on the international community to accept its international responsibility in protecting civilians and called on UNSMIL to expose the facts to the Security Council and to take deterrent actions to stop this aggression – beyond its soothing statements.

Meanwhile, UNSMIL also condemned the attack ‘‘in the strongest possible terms’’ adding that the perpetrators will face accountability.

It said that it had dispatched an assessment mission to the airport confirming that four projectiles struck the civilian parts of the airport; three projectiles landed in the parking lot and one hit the runway resulting in damage to an airplane that had carried dozens of pilgrims returning from the Hajj. At least two crew members were injured while rushing out of the plane.

It said that the attack terrorised passengers and airport staff and it constitutes a direct threat to the lives of pilgrims and other civilian passengers and cannot be justified under any pretext. UNSMIL called for immediate cessation of attacks against Mitiga airport and all civilian infrastructure and properties.

It noted that his is the seventh occasion since the end of July 2019 that Mitiga airport was hit by indiscriminate shelling, adding that these vicious attacks are designed to sow fear, create chaos, and disrupt operations at the only working airport in the Libyan capital Tripoli.

UNSMIL said it is documenting the incident for onward transmission to the International Criminal Court and the Security Council. Those behind the attacks should be held accountable, it concluded.