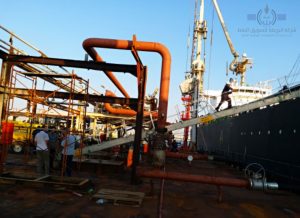 The Benghazi Asphalt Factory became operational on Monday having been out of service since 2011, Brega Marketing Company, a subsidiary of the National Oil Corporation, reported Tuesday.

The asphalt factory had received lengthy and long overdue maintenance, including the maintenance of the thermal heating system on the 20-inch line of 13 km long, which included cutting, welding and installation of valves. The heavy oil depot recycling pumps also had electric and manual maintenance.

The completed maintenance means the factory was able to receive the raw material crude product through which asphalt used in road paving is produced. The asphalt factory is slated to play a major role in Libya’s reconstruction phase.