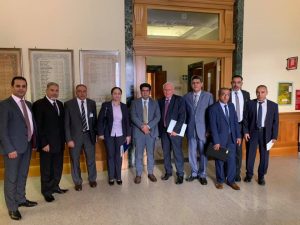 The agreement to start construction was signed at the Italian Ministry of Communications and Infrastructure in Rome, the embassy reported.

It will be recalled that the coastal motorway project stretching from the Libyan Egyptian to the Libyan Tunisian land borders was part of the Treaty of Friendship, Partnership and Cooperation, signed in Benghazi in 2008 between former Italian prime minister Silvio Berlusconi and Qaddafi as part of a US$ 5 bn compensation package for Italy’s colonial occupation of Libya.

It is, therefore, totally unclear why the Italians have agreed to commence the project at this particular time in view of the ongoing fighting between the Khalifa Hafter forces and forces defending Tripoli.