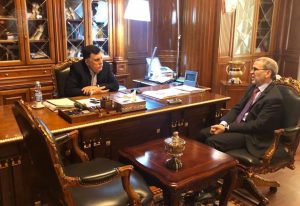 The call for the NOC’s full budget came during his meeting on Monday with the internationally recognised Libyan Prime Minister Faiez Sarraj in Tripoli today.

During the meeting, Sanalla again requested the government to implement resolution 642, which was adopted on 24th October 2013 which mandated a 67 percent pay rise for oil and gas sector workers.

The NOC reported that it had received only 58 percent of its approved budget for 2019, and emphasised that the NOC requires its full allocated budget in order to increase capacity, which will drive national growth and allow Libya to respond to global market volatility.

The NOC reported that the two parties also discussed the status of the Libyan oil and gas sector in light of recent events.