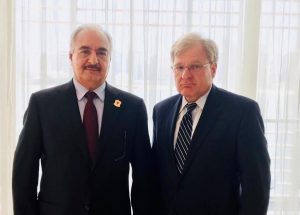 It said that the two discussed “the current situation in Libya and prospects for achieving a political solution to the Libya conflict”.

The meeting comes ahead of a planned international conference on Libya initiated by Germany seeking a ceasefire to the current fighting and a political solution to the Libyan crisis.

It will be recalled that Hafter and his LNA launched an attack on Tripoli on 4 April with the pretext of “liberating” it from the “terrorists, Islamists and militias” controlling Tripoli.

Hafter’s military campaign has so far failed to take Tripoli, with his forces suffering a setback in Gharian where they were forced out by the forces defending  the capital and nominally aligned to the internationally recognized government led by Faiez Serraj.

Indeed, after the initial advances by his forces to the edges of the capital gained through first mover’s advantage, Hafter’s forces have at best been stuck in a stalemate and in many cases reportedly being pushed back further way from the capital.

The stalemate on the ground has seen increased fighting in the air, mostly with the use of drones.

Both sides accuse the other of using foreign-supplied weapons and personnel in the fighting – despite a UN Security Council arms embargo.

Tripoli accuses Hafter of using personnel and arms from France, Egypt and the UAE, while the Hafter side accuses Tripoli of using Turkish-supplied weapons and personnel.

Salame to UNSC: fighter deaths in thousands, arms embargo is ineffective, both sides ready for peace due to battle fatigue and external state interference main driver of Libya conflict