Health reform conference to be held in Tripoli 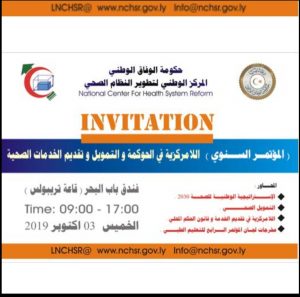 The conference will cover:

1. e-Health and the National Health Number.

5. Remapping of health facilities in Libya.

6. The health Labour market and students intake in medical schools.

Speaking to Libya Herald by phone from Tripoli today, Dr Samir Sagar, head of the NCHSR, said the conference will “present “where we are” in Libya’s national health strategy with the three year action plan for 2018-2020.

There will also be a presentation of the future long term health strategy to 2030 according to the Sustainable Development Goals (SDG) (Part of the collection of 17 global goals set by the United Nations General Assembly in 2015 for the year 2030).

The NCHSR is the health reform body that is part of the wider nationwide health reform programme established in October 2017 by the Tripoli-based Libyan government led by Faiez Serraj to drive the reform of Libya’s ailing health sector.

The body is accountable directly to the Prime Minister’s Office in order to be able to operate independently.

It has has already carried out a number of reforms since its launch. These include the launching of health insurance, the formation of a health council, a health accreditation council, reforming the medical supply organization and the official medicines list.

PPP in Libya’s health sector is a necessity