Tripoli based Libyan army to hold seminar on absorbing militias 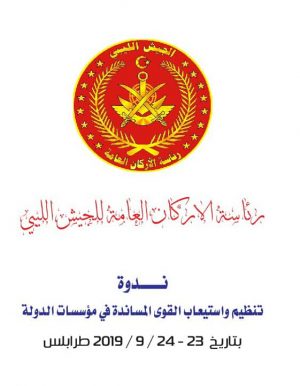 The General Staff of the Tripoli-based Libyan army, aligned with the internationally-recognized Faiez Serraj Government, announced today that it is preparing to hold a seminar in Tripoli entitled “Organizing and Absorbing Supporting Forces in State Institutions”.

“Absorbing supporting forces” is Serraj government speak for the disarmament, demobilization and reintegration (DDR) of militias.

The General Staff said the seminar would present projects and working papers on the process of integrating members of the forces supporting the Libyan army into state institutions.

The event is open to all and participants are invited to propose “good recommendations”.

The seminar will be held on 23-24 September at the headquarters of the Organization and Management Authority in the Sidi Abdel Jalil area of Janzur in Tripoli.

It will be interesting to see how serious this seminar will be and if the Serraj government will propose any serious “out of the box” initiatives to implement the DDR of Libya’s, and specifically Tripoli’s, militias.

It will be recalled that all attempts to seriously integrate militias have failed since their birth during the 17 February 2011 revolution that toppled the Qaddafi regime.

It must also be kept in mind that the Serraj government – like all previous post 2011 governments – is propped up and depends on the support of Tripoli (and other) militias.

Indeed, one of the main pretexts (or excuses his enemies would say) of Khalifa Hafter for his military attack on Tripoli is the dominance over the Tripoli government by the capital’s militias.

A success in implementing the DDR of the capital’s militias would remove one of the main factors preventing the re-formation and full functionality of the Libyan state.