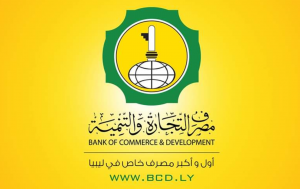 The BCD has received a licence from the eastern CBL to launch an Islamic Finance Bank (Logo: BCD).

The eastern Central Bank of Libya (CBL) yesterday issued a licence to the Bank of Commerce and Development (BCD) to launch its Islamic Finance bank.

The announcement was made at a meeting between the eastern Central Bank of Libya governor, Ali Hibri, and Jamal Abdel Malek, founder and chairman of the BCD.

The bank has a capital of LD 500 million and will be headquartered in Benghazi.

BCD is the first and largest private bank in Libya.

It must be kept in mind that Islamic compliant banking was introduced in Libya by virtue of Law No. 1 of 2013. The law was introduced by the General National Congress (GNC) banning banks from charging interest.

However, the move was seen at the time to be a highly political move pandering to the Islamists in the GNC.

Banking critics say Islamic banking has so far been a failure. They say that the law was introduced overnight to be implemented with immediate effect.

However, banks and Libya’s banking system were not – and are still not – ready for this fundamental change. This incudes the CBL itself.

A leading Libyan banking executive told Libya Herald by phone from Tripoli today that Libya’s banking sector “does not have the human resources that are knowledgeable in Isalmic banking. It takes a minimum of ten years to build such resources”.

He also added that the CBL insists that the Islamic compliant board of directors of any Libyan bank be made up of Libyans.

However, whilst Libyan “Sheikhs” may be scholars in other parts of Islam, there are not enough Libyan Islamic scholars in Islamic banking.

With regards to the legality of the licence being issued by the eastern CBL, as opposed to the internationally recognized Tripoli-based CBL, the banking executive said that the licence was granted as per existing regulations by the CBL board of directors.

He added that despite being politically split, the CBL still has the same board and that the eastern CBL has the necessary number of members to achieve a quorum.