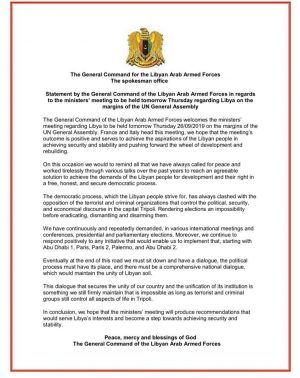 The LNA says that there can be no political dialogue or elections as long as terrorists control Tripoli (Photo: LNA).

In a statement released by the General Command of the Khalifa Hafter-led Libyan National Army (LNA) on Thursday’s ministerial meeting on Libya held on the margins of the UN General Assembly, the LNA said that it welcomed the meeting.

It said that it ‘‘always called for peace’’ and a ‘‘democratic process’’ and ‘‘elections’’ but that the democratic process that Libyans want has ‘‘clashed with the opposition of the terrorist and criminal organizations that control the political, security and economic discourse’’ in Tripoli.

This, the LNA say, renders ‘‘elections impossible before the dismantling’’ of these the terrorist and criminal organizations.

The LNA said that it still believes in and calls for political dialogue but that this is ‘‘impossible’’ as long as ‘‘terrorist and criminal groups still control all aspects of life in Tripoli’’.

It will be recalled that Khalifa Hafter and his mainly eastern-based LNA launched an attack on Tripoli on 4 April with the pretext of ”liberating” the capital from ”terrorists, militias and Islamists”.

In the largely stalled land fighting, the forces aligned to the internationally recognized Tripoli-based government led by Faiez Serraj have so far succeeded in repulsing Hafter’s offensive, pushing him out of his main operations room in Gharian.