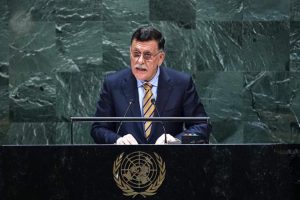 In his speech to the 74th session of the United Nations General Assembly in New York on Wednesday, Faiez Serraj, the internationally recognized head of Libya’s Tripoli-based government blamed external interference for extending Libya’s current war.

He accused Khalifa Hafter, commander of the opposition Libyan National Army (LNA) forces, of carrying out a failed coup in an attempt to militarize the Libyan state and said he held all those who support him morally and legally responsible for the crimes and deaths committed.

Serraj pointed out the ‘‘serious violations of human rights, including extrajudicial killings, enforced disappearances, as happened with HoR member Ms. Siham Sirgiwa and other national figures, and suppression of opinions, and elimination of political opposition’’ in areas controlled by Hafter.

He renewed his request to put Khalifa Haftar on the international sanctions list and to hold his supporters accountable and he called on the United Nations to urgently send an investigative mission to document the various serious violations. He also called on the Prosecutor of the International Criminal Court to speed up its investigations in crimes committed in Libya.

Serraj challenged Hafter’s narrative and pretext for launching his 4 April attack on Tripoli of ‘‘liberating’’ the capital from ‘‘militias, terrorists and Islamists’’, and called on Libyans in the east of the country to counter it. He insisted that the real narrative is a civilian democratic state versus Hafter’s military state.

He reassured his support for a political solution and dialogue to Libya’s problem, but repeated that he will never sit down again with the ‘‘war criminal’’ Haftar as he did not regard him as a partner for peace.

Serraj pointed out his decentralization policies to address regional grievances, as well as his economic reform policies. But he also alleged that he carried out ”security reforms’’ in the form of some Demilitarization, Demobilization and Reintegration (DDR) of militias.

He said that the fighting was adding to Libya’s instability and security vacuum which is adding to the illegal migration problem and creating a vacuum for terrorism.