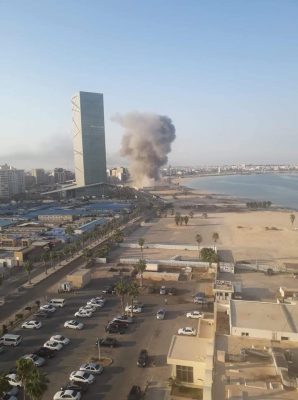 The internationally recognized Libyan government based in Tripoli and led by Faiez Serraj ‘‘condemned in the strongest terms’’ on Friday the continuing bombing of what it says are civilian targets in Tripoli by forces loyal to Khalifa Hafter.

The condemnation comes after strikes continued to be carried out against the now closed Mitiga airport and a strike on a location on a beach location in downtown Tripoli.

The location was identified as the headquarters of the Nawasi 8th Force brigade, a militia nominally aligned to the Serraj administration. Its prime seaside location between the Dat Il Imad office complex and the Marriot hotel was once occupied by one of Qaddafi’s sons.

Nawasi confirmed as much when they mourned the death of two of their members attributing his death to the ‘‘Treacherous bombing by UAE warplanes supporting the war criminal’’.

The Serraj government condemnation statement did not refer to the dead as members of the Nawasi brigade but simply as ‘‘civilians’’. It also condemned the destruction of property and the terrorizing of civilians. Tripolitanians had reported that the strike was very loud shocking them out of their Friday morning slumber.

The Serraj government said that his strikes against civilian targets was a sign of the ‘‘end of his authoritarian operation’’ and Hafter’s ‘‘treachory’’ which comes just days after Hafter issued a statement aimed at Libya talks in New York at the General Assembly announcing his readiness for dialogue and a political solution.

It said there was no excuse for the international community not taking decisive deterrent action against Hafter and that their silence only encouraged Hafter’s to commit further war and humanitarian infringements and crimes.

Tripoli ground and air fighting intensifies ahead of international conference