Mitiga airport on fire after yet another reported airstrike 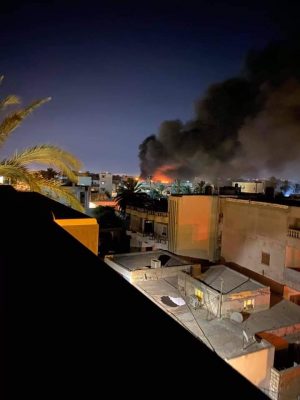 Parts of Mitiga airport were on fire yesterday after it was the subject of another airstrike by Hafter’s forces (Photo: Burkan Operations Room).

The Military Operations Room aligned with the internationally-recognized government of Libya, led by Faiez Serraj, reported that Tripoli’s Mitiga airport was on fire yesterday after it was the subject of another airstrike.

The airport has been closed to civilian flights since the first of September after an airstrike nearly hit a landing passenger plane returning with pilgrims from Saudi Arabia.

In response, the Military Information Division of Khalifa Hafter’s Libyan National Army (LNA) claimed that following reports from its intelligence services that monitor different positions at Mitiga and Misrata airports, and after the identification of these sites as being used in the processing, arming and storage of Turkish drones and their ammunition, as well as two bunkers at Misrata airport that were used for the same purpose, and as these positions threaten the LNA’s Armed Forces – its Air Force attacked them.

It claimed that its fighter jets had taken off simultaneously from several bases in order to eliminate their targets and threat.

It also went on to claim that this air campaign had achieved all its goals with precision, totally destroying the facilities used in the storage and processing of aircraft. It also claimed that its fighter jets had returned to their bases after carrying their duties and successfully achieving their goals.

Today, the pro Tripoli Operations Room claimed the ‘‘continuation of the criminal record of the rebel war criminal Haftar in targeting residential neighbourhoods and infrastructure with random shells’’ with ‘‘the fall of a shell on the police station opposite the electricity company at the Al-Jibs checkpoint and the injury of a civilian, who was transferred to hospital to receive treatment.

While yesterday it claimed the ‘‘continuing their criminal record of targeting ambulance teams and medical crews: the rebel war criminal Haftar’s militias directly targeted an ambulance in the Swạni area that caused damage to the vehicle and injured the ambulance driver.

On Monday it claimed that ‘‘UAE drones in support of the war criminal Haftar just targeting in three air raids the administrative headquarters of the Man-made River Water Investment System in the central region of Sirte and resulting in material losses to the building.

On Saturday, it claimed that ‘‘UAE drones in support of the war criminal Haftar targeted in three air raids the Bunyan Marsous and security force that eliminated the largest ISIS stronghold outside Iraq and Syria’’.

Also on Saturday it claimed that ‘‘UAE drones in support of war criminal Haftar targeted the Sirte Cattle project complex causing material losses and a civilian from shrapnel’’. It added that this bombing come four days after the announcement by the complex that it had finished its maintenance and returned to operation.

What is clear from these reports by both sides is that military action is actually intensifying leading to the New York General Assembly meetings and in the run up to the international conference organized by Germany.

It could also be surmised that neither side feel that the international community s going to take any serious action in response to the continuing military operations on the ground or in the air. Both sides feel they have impunity to act to strengthen their negotiating positions ahead of any peace negotiations.

Serraj government sets seven conditions for dialogue and political solution, will not talk to Hafter

Salame to UNSC: fighter deaths in thousands, arms embargo is ineffective, both sides ready for peace due to battle fatigue and external state interference main driver of Libya conflict