Libya’s oil revenues down by 5 percent in August, could fall further if NOC budget withheld 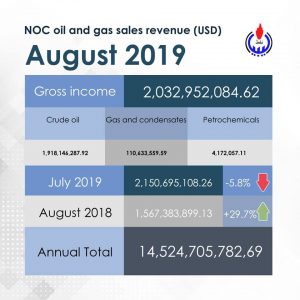 Libya’s oil revenues were down by 5 percent in August (Photo: NOC).

The NOC attributed the lower August revenues to the closure of the Sharara-Zawia trunk pipeline during the first half of the month, necessitating the shutdown of the Sharara field. It added that this loss was only partially compensated by taxes paid by partners following the 2018 gas payment invoices.

The NOC took the opportunity of the announcement of the latest revenue figures to ‘‘warn’’ that Libyan oil production may ‘‘fall precipitously over the next nine months’’ if the internationally recognized Libyan government based in Tripoli and led by Faiez Serraj ‘‘continues to withhold already approved budgets’’.

Speaking on the delayed budget, NOC Chairman Mustafa Sanalla said “The Corporation could increase production substantially, adding hundreds of millions to monthly state revenue. But that will only happen if NOC’s budget is disbursed. If the corporation’s allocations are not released without delay, Libyan oil production will be hundreds of thousands of barrels per day lower than it should be. That will have an extremely negative effect on national income.

“The Presidential Council’s (PC) Resolution 375, dated March 20, 2019, approved the Corporation’s budget for 2019, with operational and capital expenses 39% and 40% lower than requested. By July, without NOC’s knowledge, the PC had gradually reduced the approved operational and capital budgets by 150 million and 100 million dinars respectively. The rest of the allocations were late. Capital budget allocations for May, June, July and August were only disbursed mid-September, resulting in unnecessary debt accumulation and some of the operating companies refusing to provide services, due to salary delays for Al-Jowfe, National Workover and drilling Company and NOFCAT employees.”

Sanalla urged the internationally recognized Tripoli government to release allocated budgets on time, adding that failing to do so would result in a sharp decline in Libya’s oil revenues.

The complaint by Sanalla about the the Serraj government’s failure to disburse it its budget is ironic in view of the fact that it was only in August and September that Sanalla and Serraj held  meetings to discuss increasing investment in the oil sector.

The August meeting specifically dealt with increased investment in the oil sector and the implementation of plans to develop it more effectively to achieve ”additional financial returns to Libya” that would contribute to the revival of the national economy in its various fields.

More pertinently, the Serraj government reported that there was extensive discussion on an ”additional funding provision for the NOC in the coming period to implement this vision”, adding that it was agreed at the meeting to set a ”legal budget to start investing in the oil sector which is the primary source of revenue for the country”.

After participating in the August meeting, the LIA confirmed that it “seeks to build a real strategic alliance with the NOC in order to increase production rates and continue exploration projects”.

The LIA manages an investment portfolio in the field of oil and gas and owns shares, assets and companies in this field and has many partnerships in exploration projects with the largest international companies.

Furthermore, in the September meeting with Serraj, Sanalla had once more emphasised that his corporation needs to receive its full operational budget – including the 2013 agreed 67 percent pay rise for its sector workers.

The NOC had reported that by September it had received only 58 percent of its approved budget for 2019, and emphasised that the NOC requires its full allocated budget in order to increase capacity to drive national growth and allow Libya to respond to global market volatility.

It will be recalled that the NOC has been asking for an increased maintenance and investment budget for years – without much success.

It has argued that since oil is the overwhelming source of revenue for Libya (92 percent of 2019 budget) in the short and medium term, the Tripoli government should allocate it an increased budget in order to secure more oil production, exports and hence state revenues.

This is especially so since the non-oil economy is stalling badly due to a myriad of reasons including the country’s lack of security and war.

However, the political instability of the country, including the current fighting, and weak central and institutional control has meant the majority of Libya’s budget is spent on state-sector salaries (58 percent) and subsidies – rather than on investment and development projects (5.3 percent).

The fighting with the Khalifa Hafter forces has no doubt also added in the short term to the demands on the state budget.