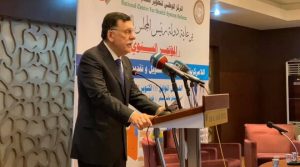 Speaking yesterday at the opening of the annual conference of the Libyan National Centre for Health System Reform (NCHSR), the internationally recognized Prime Minister of Libya Faiez Serraj, said that connecting the health sector to a decentralized overall system was one of the tools for its development.

Serraj said that his government was already working towards the establishment of a decentralized system and that the concept of decentralization was not limited to providing broad powers and greater provisions to Municipalities to enable them meeting their citizens’ needs, but it also means the liberation of the development institutions from the state’s bureaucracy.

He said that the NCHSR has been established to enable it to move and coordinate with the sectors and institutions involved in its field of work so as to have an advanced and sustainable health system as soon as possible that serves citizens across the country with the same capacity and efficiency.

Serraj stressed that governance can restore confidence in health by providing transparency, integrity, efficiency and equal delivery of services to all citizens.

He added that building governance practices in health institutions would lead to improving the sector in terms of performance and quality, meeting the needs of patients, facilitating access to services, preventing corruption and other immoral practices. He stressed that governance must be strengthened in cooperation with the municipalities, universities and the private sector, to regulate the provision of health services that are based on citizen s’ interest.

Serraj concluded by saying that there must be a determination in all sectors to support Libya’s stability by providing high-quality services in all areas and for all citizens wherever they are.

It will be recalled that the NCHSR is the health reform body that is part of the wider nationwide health reform programme established in October 2017 by the Tripoli-based Libyan government led by Faiez Serraj to drive the reform of Libya’s ailing health sector.

The body is accountable directly to the Prime Minister’s Office in order to be able to operate independently.

The reform body has has already carried out a number of reforms since its launch. These include the launching of health insurance, the formation of a health council, a health accreditation council, reforming the medical supply organization and the official medicines list.

Equally, the health system has seen much investment across clinics and hospitals including at A&E, burns and cosmetics, autism, children’s, dialysis and psychiatric units.

Health reform conference to be held in Tripoli

PPP in Libya’s health sector is a necessity