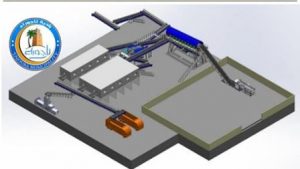 Amidst a garbage collection crisis in the country’s capital, Tripoli’s Tajura Municipality announced yesterday that it is to build a waste recycling plant.

This averages at about 2,000 to 3,000 tons of mixed garbage per day of which 60 percent is domestic waste (which includes plastic, metal, glass, paper and organic waste) and 30 percent is building waste.

However, although the tip is quite large, around 600,000 sqm, the municipality reports that it is already 90 percent full.

The municipality says that the new recycling plant is expected to deal with 80 percent of the waste it receives which will contribute to a greener environment. The plant will also produce ‘‘clean’’ recycled end products, create new jobs and help transfer know-how into Libya.

The municipality has not published the cost of the project and is unclear about how it will be financed.

Nevertheless, the fact that it is a local municipality rather than central government that seems to have come up with the solution to Tripoli’s acute garbage processing crisis is telling. It highlights the new trend of decentralization whereby local municipalities start to take more initiatives and take control of local services.

This trend has been initiated by previous governments but has in reality only begun to have some traction on the ground recently with the official transfer of powers from central government to the regions in various specializations by the Faiez Serraj government.

It also underscores the impotence of Libyan central governments since 2011 as regions have wrestled away effective power and authority – in view of the legitimacy crisis that central Libyan governments have experienced since 2011.

It will be recalled that Tripoli has been suffering a garbage crisis with municipalities failing to clear roadside hills of garbage.

It warned all relevant authorities to assume their responsibilities in view of the continued accumulation of garbage on most of the streets and squares of Tripoli for a large number of the days, and the harm and damage it may cause to citizens and the environment. This may be compounded by the forecasted rain in the municipalities of Greater Tripoli from Tuesday.

It warned that the potential resulting environmental and health pollution caused by rainfall may cost twice the cost of prevention and could leave a lasting impact.

The failure by authorities to collect roadside garbage has led to the increasing ‘‘phenomenon of burning garbage’’ which Central Tripoli Municipality said was ‘’unacceptable and unnecessary’’ and contrary to Libyan law.

On Monday, the Municipality of Sug Il Juma agree to open up a large piece of land adjacent to Mitiga airport to be used as a temporary rubbish collection point (for three months) in an effort to remove rubbish off the streets ahead of the forecast rains. The move has been criticised for being too central, too near the airport and residential areas and that it may remain a tip forever.

Tripoli has always had issues with rubbish collection, with the authorities alternating over the years and decades between subcontracting collection to the private sector and between allowing the state Hygiene Company to carry out the collection.

However, lack of salary payment, absenteeism from work, over-employment and lack of investment have dodged the service for decades.

Since the Tripoli fighting has erupted, however, the authorities say that the main cause of the problem is that the Capital’s main garbage dumping site at Sidi Sayeh is closed due to it being in the battle front in Tripoli’s war, and the various transition sites at Bu Sleem are now either full or approaching saturation.

Equally, with the spread of arms and increased local power and NIMBY tendencies, no other Municipality seemed to want Tripoli’s main rubbish dump located in their neighbourhood. Tajura Municipality has now bucked this trend.