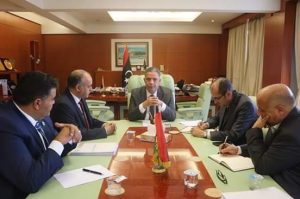 During a meeting between Tripoli’s Ministers of Transport and Economy on Tuesday, investment by means outside the state’s budget in many of Libya’s stalled transport sector projects were discussed.

The meeting included the Operations Manager of the Privatization and Investment Board (PIB), the Libyan entity that encourages foreign and local investment in Libya, and the head of the Railways Implementation Board.

The Ministries reported that the meeting discussed a number of projects, ‘‘the most important of which’’ were Tripoli International Airport and both its passenger terminals, the coastal motorway (purportedly to be build by Italy’s colonial era compensation funds) and ‘‘some ports’’. The statement did not specify.

The meeting discussed how to finance these projects outside the state budget through agreeing investment contracts with international entities capable of investing in such projects. This would be conducted through the Economy Ministry as it is responsible for organizing investment activity through its PIB arm.

At the end of the meeting, it was agreed that the Ministry of Economy will submit a proposal to form a ministerial committee to manage investment projects under its chairmanship with membership of the relevant sectors and technical committees. This will be formed under the supervision of the ministerial committee for each project, including the Tripoli Metro Project.

A meeting was also held between officials in the Ministry of Transport and the PIB to discuss how to put forward transportation sector projects targeting implementation investment, such as Tripoli International Airport, the border-to-border coastal motorway and some ports.