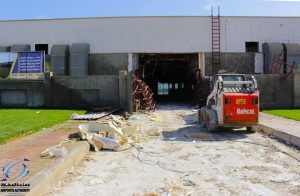 Libya’s Airports Authority has reported that expansion work has started at Mitiga airport – which has been closed since September due to being hit by airstrikes (Photo: LAA).

Libya’s Airports Authority has reported that the expansion of Mitiga airport has started – taking advantage of the fact that the airport has been shut down since early September in response to it being repeated hit by missiles/airstrikes.

The work is being carried out by a local company through the Organization for the Development of Administrative Centres (ODAC). ODAC is the state entity established under the Qaddafi regime and charged with the implementation of state projects worth billions of dollars.

The Airports Authority said the project should take three months to complete. The work entails expanding the international departure terminal with 18 new reception gates and 3 departure gates to accommodate more than 750 passengers. There will also be expansion at the border control hall and hand baggage check area.

There will also be expansion of some of the service facilities and commercial areas to attract more passengers and deliver more appropriate services, the Airports Authority reported yesterday.