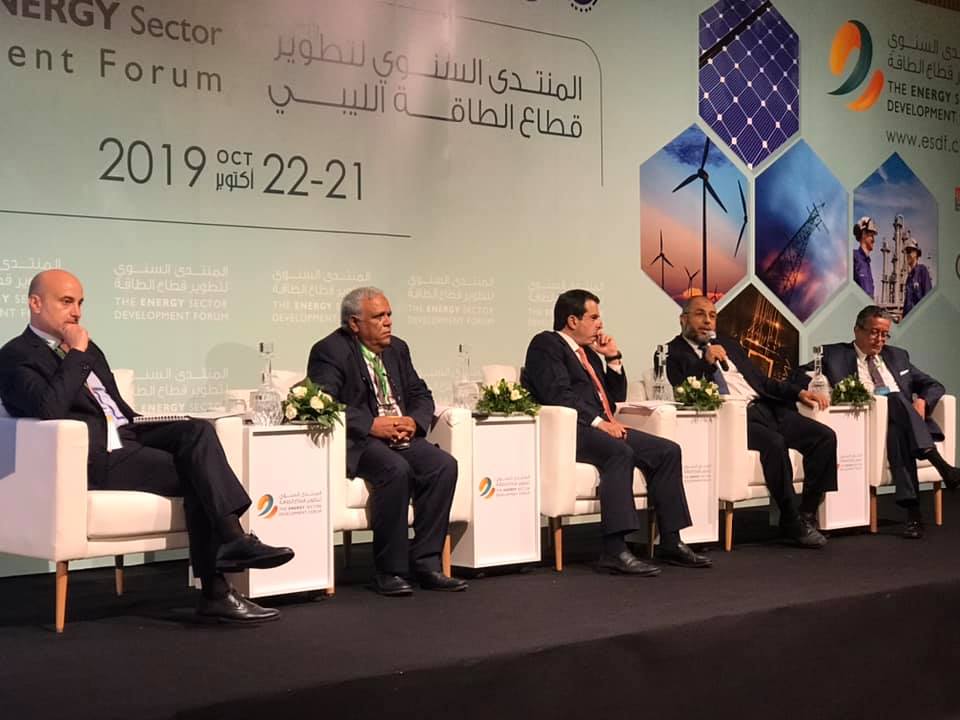 Members of one of the panels at the Libya Energy Sector Development Forum (Photo: ESDF)

Calls were made at a two-day Libyan energy forum held in Tunis on 20-21 October for a return of an oil ministry and for the national electricity company GECOL to be split into three separate companies covering transportation, generation and distribution.  There were also calls for the authorities to open the door to greater private sector involvement in both the oil and electricity industries.

More than a hundred Libyan state officials, businessmen and representatives of foreign companies took part in the two-day event, marked by candid assessments of the two sectors – and not just because of the current political situation. Officials from both the National Oil Corporation (NOC) and GECOL as well as representatives from the private sector were largely united in identifying the scale of the challenges faced by both industries to modernise and expand, and in particular where the money for it would come from.

In the case of the NOC, whose proposed five-year plan to replace corroding and out-of-date equipment, bring in new technology and boost production is costed at LD 15 billion, there was broad agreement that the private sector, the banks and international investors could and should provide much of the funding required.  However, there was also broad agreement that the authorities were doing little to enable that to happen and oil production to grow. The accusation that the government had “no vision” was heard from many, if not most, of those attending. Some said that despite the NOC’s need to look to the private sector for financing, the government did not want either this or the growth of the private sector.

There were also calls for greater private-sector financing and involvement in the electricity industry. There was no reason, for example, why the Libyan private sector could not build and own power stations, selling power to GECOL or to a distribution company if GECOL were split up as several delegates thought it should be.

A major problem was demand.  GECOL officials put production at 5,000-5,500 MW but current demand at 7,500 MW. It needed another 20 to 25 percent capacity to cover emergencies, a GECOL official said. That meant that currently it should have the capacity to provide around 8,400 MW. There were projects still to be completed which would help meet that figure, but given the current situation is was unknown when they would be ready.  Moreover, studies showed that by 2030 demand would reach 15,000 MW.  Of this, it was hoped that 5,000 MW would be provided by renewable energy, mainly solar power.  But again, it was pointed out that the authorities were doing little to make this happen, either by providing the finance or ensuring the Libya Renewable Energy Authority can tap the private sector through bonds or loans, or by joint ventures.

It was pointed out that the reality of free electricity in Libya, where the overwhelming mass of Libyan refused to pay their electricity bills, was encouraging overconsumption and needed to end. Electricity consumers would never bother to cut usage or buy more expensive but more energy-efficient electrical equipment so long as they did not have to pay for the power.

“Only when you receive an expensive bill will you rationalise your use of electricity”, noted one delegate.

All, though, agreed that there was no chance of enforcing payment of electricity bills until the current crisis was over.

NOC officials said that production was currently at around 1.28 million barrels a day and that the aim was to raise it to 2.2 million b/d by 2024.  There was much to do. Some fields, such as the Mabrouk field south of Sirte, had been massively damaged in fighting since 2014 and would take years to restore, it was explained.  NOC wanted to go to the capital markets and the private sector to raise the finding required to expand, but the government was not taking the decision need for that to happen.

Other calls were a new law to replace and update the 1955 Oil Law and a revived ministry of oil. The latter was seen as a sensible move.  It would be a regulatory and supervisory body while the NOC could get back to being a holding authority. There was no reason, it was also pointed out, why the NOC could not go back to receiving oil revenue, as it did till 1984, and paying the treasury royalties and taxes on oil income.  The system had been changed by an assistant minister, simply because with low prodiction and low prices at the time, the Libyan state was not earning enough.  It could be changed again by ministerial decree, it was suggested. This was unlikely, though, delegates said.

They also stressed that both the NOC and GECOL were employing too many people and that productivity had declined as a result. One way of rationalising this was to encourage employees to set up their own companies which could then provide services to the energy market.

It was claimed that some were already doing this illicitly while still staying on the state’s payroll.

There have been numerous workshops and conferences on the oil sector in recent years, but this was the first on the electricity sector since 2012.

It was also the third forum this year organised by Sectors Development Forums, a joint venture between Tassili Media and several Libyan institutions.

The previous two were on banking and real estate. Two more are planned next year, on health and telecommunications.