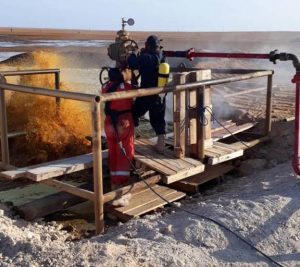 The NOC reported that its Shadar oilfield leak had been fixed (Photo: NOC).

Libya’s state National Oil Corporation (NOC) reported on Tuesday that two of its subsidiaries, Sirte Oil Co and Waha Oil Company succeeded last Sunday in controlling a leak in well A1-126 that started on 5 October in the Shadar field.

It reported that a team of engineers and technicians from the two companies worked quickly on the maintenance of the well to control the leakage and to prevent any harm to the well or the environment. The leak did not cause any significant damage, the NOC reported.

The NOC commended the efforts of the workers and the role played by all national and foreign service companies which worked together despite difficult working conditions and a challenging security environment.

It highlighted the fact that the well was drilled in 1968 by Mobil but was not developed because it was economically unfeasible at the time. The field was recently granted to Zallaf Oil & Gas Exploration and Production Company. A feasibility study is currently being conducted, with the intent to develop the field and commence production when appropriate, the NOC explained.