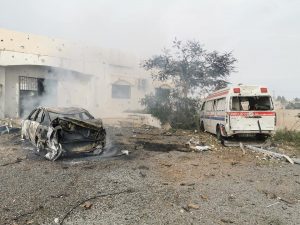 Libya’s Tripoli Ministry of Health strongly condemned on Thursday the continued targeting, attributed to Khalifa Hafter forces, of field hospitals, medical staff, health facilities and ambulances. The latest of which was the targeting of two field hospitals and ambulances at dawn on Thursday in the Salah al-Din and Wadi Al-Rabea area, it reported.

The attack killed a medic, lost another medical person, injured three medical personnel and destroyed the hospitals with their medical equipment and ambulances.

These victims have died while carrying out their humanitarian medical duty at various locations in field hospitals and ambulance points, the statement added, which went on to express displeasure at the international silence over these attacks and violations. These attacks, it added, violate all domestic and international humanitarian laws, and violates the charters and customs that criminalise the targeting of medical personnel and health facilities.

The Ministry said it considered these acts as war crimes in addition to the list of unjustified attacks on the health sector and its employees recorded by the Ministry from the beginning of 4 April – the date when Khalifa Hafter launched his attack on Tripoli.

The ministry also renewed its call for the Libyan government, the UN Security Council, UNSMIL and the International Criminal Court to act to repel this aggression, prosecute the perpetrators and bring them to justice to get their just punishment.