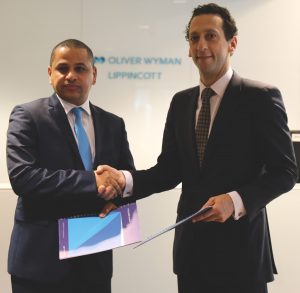 LIA chairman Ali Mahmoud with David Clarkson, a representative of the executive board of Oliver Wyman London (Photo: LIA).

The Libyan Investment Authority (LIA) has confirmed that the global management consulting firm, Oliver Wyman, has been appointed ‘‘to provide strategic guidance and support to the LIA’’ from January 2020.

The contract was agreed at a meeting in London last week (25 October 2019).

The LIA said that this move was part of its ‘‘transformation to manage its assets as effectively and as efficiently as possible in the interests of the Libyan people’’.

It explained that the appointment of Oliver Wyman is part of the ‘‘governance and management reforms being undertaken by the LIA to ensure that it adopts international best practices for sovereign wealth funds’’.

Oliver Wyman’s role is to improve its operational processes, develop its administrative structures and build capacity within the LIA.

It added that the advisory role is a key step in ensuring that the LIA complies with UN resolutions and one of the priorities of the strategic plan set by the Board of Directors of the LIA, which has been working for more than six months to improve governance, transparency and institutional reform on the fund for future generations.

The LIA reminded that its Board of Trustees, headed by Faiez Serraj, has already given permission to the LIA Board of Directors to appoint external auditors and forensic review experts.

Commenting on the appointment of Oliver Wyman, Ali Mahmoud, Chairman and CEO of the LIA said:

“The LIA is looking forward to working in close cooperation with Oliver Wyman to implement an enhanced governance programme. We are determined to undertake fundamental reforms to ensure that the LIA follows international standards of best practice for sovereign wealth funds. As an independent wealth fund our priority is to swiftly adopt international best practice. This appointment is the latest element of our strategy to undertake an extensive programme of reform to ensure that the LIA is able to manage our assets as effectively and as efficiently as possible in the interest is of the Libyan people.”

The appointment of Oliver Wyman by the LIA is seen as a long term move by the LIA to improve its reputation and governance to convince the international community to at least ease the UN sanctions. This would enable it to better manage its assets, which are currently making some losses due to the sanctions, and maybe the LIA would be allowed some access to limited funds to help Libya’s ailing economy.

In August, the LIA announced some internal reforms in order to reduce conflict of interests and improve governance.

LIA amends its internal rules to stop conflict of interest

LIA blames self-interested parties for arrest of its chairman