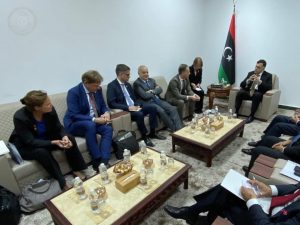 Faiez Serraj, Libya’s internationally recognized Prime Minister met with German Foreign Minister Heiko Maas and his delegation in the western city of Zuwara yesterday. The German delegation had travelled overland from Tunisia through the Tunisian-Libyan border – about 60 km away.

The Libyan government reported that the Germans presented details of the Berlin conference on Libya to be held at as yet unspecified time aiming to find a solution to the Libyan crisis. UNSMIL head Ghassan Salama was also present.

The German delegation stressed their country’s support for a political solution in helping the Libyan people to overcome the current crisis and renewed their commitment to working with the Libyan government to achieve stability in Libya, the Tripoli government reported.

It also reported Germany’s clear position on the Tripoli war by rejecting the attack on Tripoli and declared that position as soon as the aggression occurred. Germany also confirmed its support for UNSMIL’s plan to resolve the crisis and confirmed its eagerness for all influential parties to participate in the Berlin conference to achieve fundamental results. Germany also agreed that the final statement of the Berlin conference will be issued only after the full agreement of participants.

The German delegation also explained that its invitation of the permanent members of the UN Security Council to the Berlin conference comes so that there is a commitment by the Security Council to what is agreed at Berlin. Other states were invited to ensure the cessation of military supplies to Libya and the establishment of the principle of non-intervention. The importance of a ceasefire as a basis for the success of the conference was also stressed.

Serraj welcomed the German Minister and his delegation and expressed appreciation for the German position against the aggression on Tripoli. He welcomed the Berlin conference and stressed the importance of learning from past mistakes and the need to study and evaluate the reasons for the failure of previously held meetings in making progress on the ground.

Serraj pointed out that international division on a unified political stance on Libya had encouraged some parties (Khalifa Hafter) not to commit themselves to outcomes of previous conferences and to block attempts to reach a settlement.

Serraj also said that the ceasefire was subject to the withdrawal of the (Hafter’s) aggressive militias and that there should be no threat to the capital in any way.

At a press conference at the end of the meeting all parties stressed that the solution could only be a political one and not a military one.

UNSMIL head Salame also explained that three in-depth meetings had been held with various parties in preparation for the Berlin Conference, that there will be a fourth meeting in three weeks time, and that a committee would be set up to follow up on the implementation of the decisions to be taken by the conference.