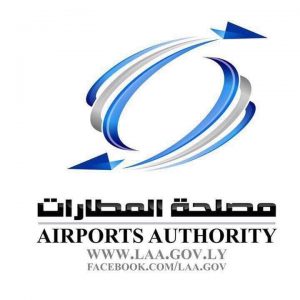 Libya’s Airports Authority and Privatization and Investment Board to publish plans to attract private sector investment in the country’s airports (Logo: LAA).

A meeting was held on Sunday between Libya’s Airports Authority and the Privatization and Investment Board (PIB) during which a number of topics related to investment in airports and a range of options that will contribute to attracting private sector investors, were discussed.

The rationale of involving the private sector was based on the need to reduce the spending burden on the state budget while improving services provided to citizens in this vital sector.

The most important outcomes, a source from the meeting confirmed to Libya Herald, was the need to prepare a disclosure document containing basic data on the target airports. It was agreed to form a working group to collect the required data and coordinate with the relevant authorities and lay the legal foundations and frameworks for investment in the airports sector.

The source reported that targeted airports will be the three main hubs, Tripoli International Airport, Benina and Sebha airports. These will be given priority. The source confirmed that TIA was now free from its commitments with previous Qaddafi-era investors and was therefore free to move forward with its development plans.

The source also indicated that Libya will be looking for experienced investors with the ability to transfer know how, which precluded Libyan companies. This did not mean that a Libyan company could not form a joint venture with a leading international company, however.

There are also plans to create a ‘‘winter airport’’, probably in Ghadames or Taminhent.

A new Libyan Investment Plan across all sectors will also be revealed soon and an international meeting on investment in Libya will be announced ”soon” to be held in a ‘‘major capital’’, the source added cryptically.