As the dinar gains value, straight from the horse’s mouth: CBL reforms are working 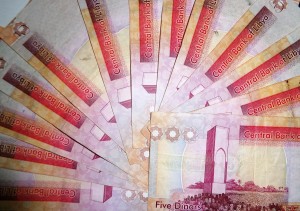 A crestfallen Tripoli black-market foreign currency dealer told Libya Herald on the phone yesterday that the economic reforms initiated by the Tripoli Faiez Serraj government and the Central Bank of Libya were working.

The comment came in response to the fall in the value of the U.S. dollar to under the psychological 4.00 Libyan Dinar per dollar mark for the first time in years. Indeed, the dollar had fallen to as low as LD 3.87 during yesterday’s inter-day trading.

The downcast currency trader said it was a simple matter of demand and supply, in his opinion. ‘‘There just isn’t any demand in the black-market’’ he complained. ‘‘The Central Bank (of Libya) is opening many direct Letters of Credit (LC’s) for the large traders. They no longer have reason to seek doolars on the black market’’, he explained.

Moreover, he added ‘‘even the traders in overseas debit cards are no longer finding it profitable to liquidate hard currency debit or prepaid cards in Turkey. It does not pay off. It is no longer profitable’’, he lamented.

‘‘Nobody is bothered with the black-market anymore now when they can go directly to the banks to obtain their dollar needs either through the (annual) family allowance or transfer for education or health’’.

‘‘And since the large traders are obtaining LCs, there is no volume in the market. Demand for the big profitable amounts has collapsed’’, he said in a reflective tone.

‘‘Only small buyers, usually travellers, wanting a few thousand urgent dollars here and there are buying’’.

And in a couple of heartening sentences to Faiez Serraj and the CBL Governor, he added, ‘‘So we can say that the (Serraj economic) reform plan (introduced in September 2018) has worked 200 percent’’.

‘‘And its very likely that the exchange rate will continue to fall even further’’, the black-market foreign currency dealer concluded.