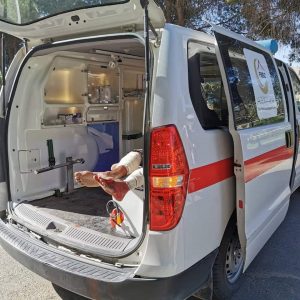 An aerial attack on a biscuit factory yesterday on the outskirts of Tripoli led to the death of 7 and the injury of 19 (Photo: Serraj Ministry of Interior).

Libya’s Faiez Serraj-aligned Interior Ministry yesterday called upon the international community to prosecute Khalifa Hafter, in his role as commander of his Libyan National Army (LNA), for the air strike on a biscuit factor yesterday that killed 7 and injured 19. The Interior Ministry statement also called for the prosecution of China’s Wing Loong drone manufacturer for supplying its drones used in the attack.

Meanwhile, in New York, Serraj’s Foreign Minister Mohamed Siala addressed the Security Council in which he stressed that the crime of targeting a biscuit factory in the Wadi Al-Rabea suburb of Tripoli, which killed Libyan, Egyptian and African citizens, is a war crime by all standards and that the killings and abuse were carried out by a group of ‘‘terrorists belonging to Haftar’s militias’’.

Commenting on the incident to the UN Security Council, UNSMIL head Ghassan Salame said ”I am angry and sad to report to you that today there was another mass civilian casualty event.  A biscuit factory in the Wadi Rabi’a neighbourhood of Tripoli was hit by an air strike, according to early information. The attack has caused what we currently believe to be ten fatalities and over 35 injuries.  It appears that the majority of the dead were migrants, but that at least two were Libyans.  Regardless of whether the attack deliberately targeted the factory or was an indiscriminate attack, it may constitute a war crime.  We are working to verify the facts and will update you accordingly”.

The Minister called on the withdrawal of Hafter’s militias and the return to their places before 4th April attack, in addition to obliging the countries involved in Libya to immediately stop any actions that would affect the political process, especially neighbouring countries, in any dialogue including the Berlin process.