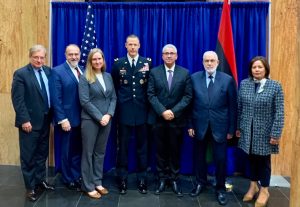 Libya’s aerial fighting has continued to escalate despite the U.S calling on Khalifa Hafter’s Libyan National Army to end its attack on Tripoli.

The Libyan delegation expressed their deep concern about the security situation and its impact on the civilian population.

For its part, the United States called on the Khalifa Hafter-led Libyan National Army to end its attack on the capital Tripoli, and that this (ending of the attack) will facilitate further cooperation between the United States and Libya to prevent unjustified foreign intervention and strengthen the authority of the legitimate state and address the issues behind the conflict.

The American delegation, represented by a number of U.S. government agencies, also confirmed its support for Libya’s sovereignty and territorial integrity in the face of Russia’s attempts to take advantage of the conflict against the will of the Libyan people.

Equally, on Thursday 14 November by U.S. Charge d’Affaires Joshua Harris with (Tobruk) House of Representatives First Deputy Speaker Fawzi al-Nuweiri ‘‘to discuss efforts to end the Tripoli conflict’’. The U.S. embassy reported that Charge Harris ‘‘reiterated the U.S. call on the LNA to end its offensive on Tripoli. He also underscored U.S. support for Libya’s sovereignty and territorial integrity in the face of Russia’s attempts to exploit the conflict against the will of the Libyan people’’.

However, despite these statements by the U.S., aerial fighting has continued to intensify in the battle for Tripoli – in total disregard for the U.S. calls for an end to fighting.