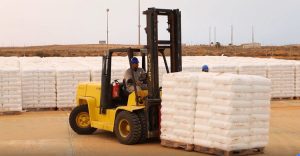 The company said that this day had been long coming after the closure of the processing plant for seven years.

Masood Munisi, the Director of the Polyethylene Plant said that the product is ready for sale and available. He assured potential customers that the production capacity of the plant will cover all the needs of the local market with high quality and specifications. He said that the company was in the process of operating the second line soon. He did not give a date.

It will be recalled that RASCO’s polyethylene factory restarted production on 8 October after a seven-year production halt. Earlier this month the company also announced the restart of its plastic sheeting factory.

Benghazi Chamber of Commerce described the reopening of the plastic sheet factory as ‘‘a rare positive boost to a war-ravaged economy and the country’s political divisions’.

Ras Lanuf Oil and Gas Manufacturing Company, a wholly owned subsidiary of the National Oil Corporation (NOC), operates the Polyethylene plant in Ras Lanuf, which has been closed for more than eight years due to insecurity. It reopened last month with an initial production capacity of 80,000 tons per year, which is expected to increase to 160,000 tons.

The port of Ras Lanuf had also been closed for years and the surrounding area has been repeatedly besieged in battles between rival Libyan groups and ISIS attacks, destroying some of the oil storage tanks there.