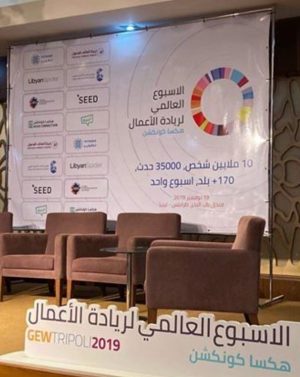 The revelation was made by Mohamed Alaswad of the EU-funded SLEIDSE project during his speech Tuesday at the Global Entrepreneurship Week Tripoli 2019 (GEW), held in Tripoli and organized by Libyan NGO Hexa Connection.

Hexa Connection is a Tripoli-based NGO established in 2013 which operates across Libya. It describes itself as being concerned with technological development, aiming to help build and develop local societies using technology.

Alaswad is credited with establishing Libya’s National SME Programme in 2005 before joining the EU’s Support to Libya for Economic Integration, Diversification and Sustainable Development (SLEIDSE) programme in 2016, headquartered in Tunis.

Alaswad said that there are two issues that need to be considered with regards to the concept of entrepreneurship and that is clarification of the understanding of the concept at both the local and global level and the other issue is; is entrepreneurship a matter for the government or is it a hobby?

He said that throughout Libya’s history there are specific cities in Libya and Tripoli’s old city and its Gold Market that have been very important examples of entrepreneurship. Libya has to  invest in its human resources capital and entrepreneurship as part of building the Libyan economy.

He added that in 2016 international reports suggested that there was a failure by Libya’s youth in creating a Libyan state, but a study in August 2016 reported that the percentage of entrepreneurs in Libya was equivalent to the international rate of 3 percent.

Today, Alaswad said, the Libyan state should provide seven key elements to help entrepreneurship; 1/the organizational side, 2/the knowledge and educational aspect, 3/the aspect related to support and investment, 4/the Council of Entrepreneurs and the Chamber of Commerce, 5/business incubators, 6/the issue of finance and 7/economic information.

Alaswad said that the Libyan state must remove the political ‘‘bars’’ that have surrounded the Libyan economy over the past decades, and one of the growth indicators of Libya’s entrepreneurship in Libya for 2019 is the EU’s SLEIDSE programme, which includes the launch or announcement of the following of five projects:

1-The support and spread of entrepreneurship through civil society institutions, among them Hexa Connection, out of six different NGOs.

2-A Libyan school of Electronic Entrepreneurship (Libus.ly). This has 110 online training hours and which the EU has taken as a model in more than ten other Arab countries. In a short period of time, Libus managed to make more than 150 Libyan companies successful, he explained.

3-Loans: Alaswad revealed that in Libya, since the 1970s and up to 2010, there have been loans made out of about LD 10 billion, Unfortunately, he said, 90 percent of these have not been returned. There may have been an ‘‘error in the financing mechanism policy’’, he speculated, causing banks to fear giving out loans.

However, to help mitigate this, he added, there has been a decision to reorganize the Loan Guarantee Fund with a board of directors of seven Ministers, the Libyan Business Council, the Chamber of Commerce, Libyan Association of Banks and other related actors.

As a result, on 12 December, Alaswad revealed, an agreement will be signed with seven Libyan banks for a LD 150 million Credit Guarantee Fund with up to LD 5 million available for businesses directly from the banks.

Micro-Credit: Alaswad also mentioned the recently launched micro-credit programme ‘‘Namaa Tamweel’’ to be provided by Assaraya (ATIB) bank and part funded by the UK government. Its Benghazi branch was opened on 24 October with the Tripoli office opened last week. This programme will be able to lend more to than 5 million companies, ranging from cafes to barbers, added Alaswad.

5-Finally, Alaswad revealed, entrepreneurship will be included in Libyan universities as of the beginning of next year.

The fund referred to by Alaswad was the Credit Guarantee Fund and not the entrepreneurship fund. The amount of money available is LD 150 million and not as originally reported at LD 350 million.

Microfinance organisation to set up in Libya