U.S. and Italian drones crash or shot down over Libya 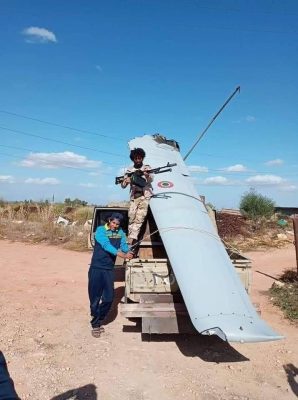 An Italian Predator drone crashed or was downed over Libya on Thursday (Photo: Social Media).

Two foreign unmanned drones have been ‘‘lost’’ over Tripoli over the last few days.

Firstly, two days ago, the Italian embassy confirmed Libyan media reports and photographs that one of its drones had ‘‘crashed’’ in Libyan territory. Libyan reports said it had been located near Tarhuna, about 65 km southwest of the capital Tripoli.

The Italian statement said that ‘‘Today (21 November) a remotely piloted aircraft Predator of the Italian Air Force, which was carrying out a mission to support the ‘‘Mare Sicuro’’ operation, cashed in Libyan territory.

The causes of the event are being assessed’’, the Italian statement concluded.

These operations are critical to counter terror activity in Libya and are fully coordinated with appropriate government officials.

The incident is currently under investigation’’, concluded the AFRICOM statement.

The alleged loss or shooting down of drones over Libya has become common since the war for Tripoli started on 4 April when the Khalifa Hafter-led forces attacked the capital.

However, unlike reports of shot down drones by both the Libyan contestants in the war for Tripoli which have often been contested, these two drone incidents have been admitted by the owners/operators of the drones.

The incidents confirm the increase in, and increased participation in the Tripoli’s aerial wars. They also confirm the prominent role of outside interference in the war and Libyan affairs since the collapse of the state in 2011.

UNSMIL head Ghassan Salame has referred to increased foreign interference in Libyan affairs in his reports to the UN Security Council, and has called for a unified stance by the international community on their foreign policy towards Libya.