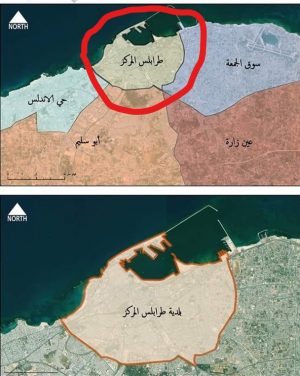 Residents in neighbouring municipalities are dumping their waste within the boundaries of MCT (Photo: MCT).

The Municipality of Central Tripoli yesterday announced a tender bid for the collection and disposal of rubbish within its boundaries.

The tender bid document will be available from its Tripoli headquarters from tomorrow 26 November until 2 December.

It will be recalled that the Municipality had opened the registration for interested companies from 20 to 31 October.

Tripoli, as well as many other Libyan cities, is experiencing a rubbish collection crisis. Rubbish has been pilling up on roadsides uncollected for a number of reasons, ranging from lack of money, absenteeism by council workers to filled up transition rubbish tips due to the fighting on the boundaries of Tripoli.

The Municipality of Central Tripoli has also suffered from rubbish from bordering municipalities being dumped on its streets. This is due to the fact that it has less residents and was able to clear up its own rubbish quicker. Other larger Municipalities have been less efficient in collecting their rubbish due to a much larger residential population.

A number of municipalities are now proactively seeking recycling and incineration programmes.

Foreign company to be contracted for city cleaning, recycling and pest control