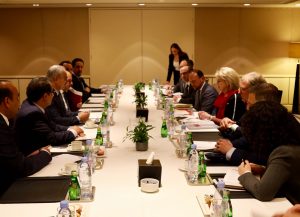 The officials underscored the United States’ full support for the sovereignty and territorial integrity of Libya and expressed serious concern over Russia’s exploitation of the conflict at the expense of the Libyan people.

These frank discussions build on recent talks with Tripoli-based officials aiming to establish a common basis for progress between the parties on the issues that divide them, in the context of moving toward a ceasefire. These include concrete efforts to address militias and extremist elements, and the distribution of resources so they benefit all Libyans. The United States urges the parties to seize this opportunity to build a secure and prosperous future for Libya’’.