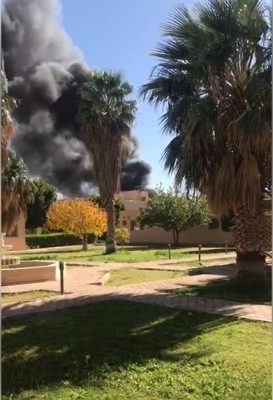 Fighting between the pro Serraj and pro Hafter forces broke out in the El-Feel oilfield today (Photo: NOC).

Forces aligned to the internationally recognized government in Tripoli led by Faiez Serraj attacked and occupied the El-Feel oilfield today. Production has been halted.

The field had previously been held by forces aligned to Khalifa Hater and his Libyan National Army (LNA).

The LNA has mounted a counterattack with airstrikes and ground attacks. The situation is still fluid.

The NOC said that it ‘‘has shut production at the El Feel oil field due to ongoing military activity in the area’’.

NOC chairman Mustafa Sanalla added: “There have been air strikes at the gates of the El-Feel oil field and inside a housing compound at the field used by NOC personnel. NOC staff at the field are protected in safe areas, but they cannot resume their normal duties. Production will remain shuttered until military activity ceases and all military personnel withdraw from NOC’s area of operations.”

UNSMIL, meanwhile, expressed ‘‘grave concerns over violence at the El-Feel oil field, which threaten the safety of NOC staff and led to shutting off its 75,000-barrels-per-day production.

UNSMIL joins the National Oil Company (NOC) in calling for an immediate cessation of military operations near the oil fields to protect civilian staff and oil infrastructure. The Mission reiterates that Libya’s natural resources belong to all Libyans and must not allowed to become an element in the current conflict. Obstructing the oil production will affect all Libyans across the country and add to their suffering.

The Mission further stress that Libya’s oil infrastructures and facilities should remain under the exclusive control of the NOC’’.