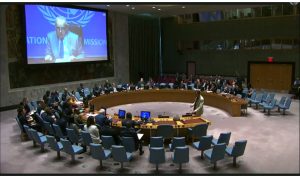 In a statement on the situation in Libya, the UN Security Council yesterday called on all parties to urgently de-escalate and to commit to a ceasefire. It reiterated its full support for UNSMIL head Ghassan Salame’s peace efforts and expressed concern on reported breaches of the arms embargo as well as the growing involvement of mercenaries.

The statement called on all Member States not to intervene in the conflict or to take measures that would exacerbate the conflict.

Here is the full statement:

The Members of the Security Council reaffirmed their full support for the leadership of the United Nations Special Representative of the Secretary-General (SRSG) Ghassan Salamé and for his work to resolve the conflict in Libya. They welcomed ongoing international efforts in support of SRSG Salamé to move forward a Libyan-led and Libyan-owned political process facilitated by the United Nations as well as to engage with Member States and the Libyan parties in the framework of SRSG Salamé’s three step proposal to reinforce the UN endeavour. They called on Member States and the Libyan parties to engage constructively with SRSG Salamé as lasting peace and stability in Libya would only come through a political solution. They recalled the commitment of the Libyan parties to work constructively with the UN as agreed in Paris in May 2018, in Palermo in November 2018, and in Abu Dhabi in February 2019. They noted the ongoing efforts in support by the African Union, the League of Arab States, the European Union and others.

The Members of the Security Council expressed particular concern regarding the reported breaches of the arms embargo set out by SRSG Salamé in his briefing as well as the growing involvement of mercenaries. They called for full compliance with the arms embargo by all Member States, in line with resolution 1970 (2011). They called on all Member States not to intervene in the conflict or to take measures that would exacerbate the conflict.

The Members of the Security Council reiterated their call on all Libyans to work constructively towards the unification of Libya’s military and economic institutions; establishing unified and strengthened national security forces under civilian government authority; and a unified Libyan Central Bank.

The Members of the Security Council reinforced the importance of the sovereignty, independence and territorial integrity of Libya.