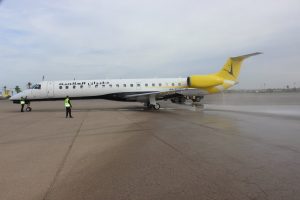 The Embraer ERJ 145 is slated to go into operation on domestic flights at the beginning of 2020 with international flights scheduled in the future.

The company’s Commercial Director, Nizar Al-Aradi, also confirmed that a third aircraft of the same type will be added to the company’s fleet at the beginning of the new year.

It will be recalled that in December last year Global Air had received its first ERJ-145 LR which the company had said was part of its efforts to expand its services from air freight, which represents its core activities, to passenger transport.