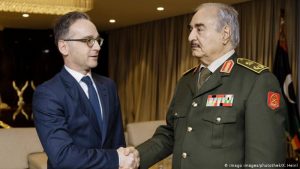 Germany’s Foreign Minister Heiko Maas confirmed after his meeting with Khalifa Hafter in eastern Libya yesterday that the leader of the forces attacking Tripoli would attend the Berlin conference and continue to respect the current ceasefire (Photo: DW).

Germany has confirmed that Khalifa Hafter, leader of the Libyan National Army forces attacking Tripoli, will attend the 19 January international conference on Libya to be held in Berlin.

The confirmation was made yesterday after German Foreign Minister, Heiko Maas, met Hafter in eastern Libya.

Maas also reported that during their meeting, Hafter assured him that he would ‘‘continue to honour the current ceasefire’’.

Faiez Serraj, the head of the internationally recognized Tripoli based Libyan government had confirmed yesterday that he would be attending the Berlin conference.

It will be recalled that last Sunday a ceasefire became active after it was called for by Presidents Putin of Russia and Erdogan of Turkey at their Istanbul conference.

But it will also be recalled that subsequently, Hafter had left Moscow last Tuesday without signing a long-term Libya peace deal proposed by Russia and Turkey.

This came after Faiez Serraj had signed the deal on Monday and left Moscow. Hafter had asked to be given time to consider the deal until Tuesday but then left Moscow without explanation. He was later reported to have met tribal and military leaders in the east.

Hafter had launched an unprovoked attack on Tripoli on 4 April 2019 on the eve of a UN-organized (Ghadames) conference on Libya seeking a long term political solution to the country’s crisis.

Hafter’s justification for his attack on Tripoli was to ‘‘liberate’’ the capital from ‘‘Islamists, militias, terrorists and corruption’’.

The international conference is deemed as a necessity as the war over Tripoli has taken an increasingly regional and international dimension with various countries supporting the two sides. It is purported that Russia, France, Egypt, UAE, Saudi Arabia and Jordan are supporting Hafter to varying degrees.

On the other hand, Qatar and Turkey are purported to be supporting the internationally recognized Tripoli based Libyan government led by Faiez Serraj.