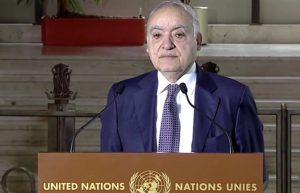 Talking to the media today in Geneva, UNSMIL head Ghassan Salame confirmed that Libya’s 5+5 Military talks had started and were making progress.

The 5+5 Joint Military Commission was one of the outputs of the 19 January Berlin conference on Libya aimed at turning Libya’s much violated military truce into a permanent ceasefire.

The initial 12 January truce had been called for by Turkey’s President Recep Erdogan and Russia’s counterpart Vladimir Putin – two of the states actively supporting the opposing Libyan sides.

Talking to the media today in Geneva, UNSMIL head Ghassan Salame said that ‘‘after the international conference that was held in Berlin, the Mission has put together three tracks to end the Libyan crisis.  One is an economic track that in fact started before the Berlin conference in Tunis on January 6 and the next meeting of the economic and financial track is going to be held in Cairo on the ninth of this month.

The second track is a military track, military and security track, and is now usually called the 5+5 track because it is made of five officers, high-ranking officers, appointed by the internationally recognized Libyan government in Tripoli and five other high-level, high-ranking military officers appointed by the commander of the eastern-based Libyan National Army led by Khalifa Haftar.

Therefore, both sides have come to Geneva and we started yesterday to discuss with them a long list of points on our agenda, starting an attempt to transform the truce into a more solid one, less often violated by either side, but also to transform that truce into a real agreement on a lasting ceasefire.

So all these technical questions, but so crucial in order to push forward the whole process, are being discussed here in Geneva, and I am happy to report that we are not leaving aside any of the questions that are necessary in order to produce that agreement on a lasting ceasefire’’.

Media question: You mentioned the monitoring process after a ceasefire.  We know that the European Union suggested that European soldiers might assume this task.  Is it a scenario that could be feasible and that you have already talked (about) with both delegations?  How long do you expect these talks to last this week?

Salame: Well it is after all a decision that needs to be taken by the Libyans themselves: what kind of monitors they want for their ceasefire.  I know the discussions taking place within the EU, but we are just starting the conversation between the Libyans.  This is after all the first time since a very long time that high-ranking officers of the two sides meet, the very very first time.  In fact, I think it is the very first time ever.  Therefore, don’t expect from one meeting yesterday afternoon to settle all these issues, but certainly during the week, the European proposal will be brought to the table.

Media question: Have the parties agreed, first, have the parties sat down together, and is there a genuine agreement concerning turning the truce into a permanent ceasefire?

Salame: There is a clear willingness by the parties on this.  The parties have expressed their agreement on the necessity to turn the truce into a permanent ceasefire. Therefore, the principle, this concept, has been adopted from the first session.  Now the question is, what are the conditions of this agreement; that is what we will discuss today and tomorrow and the day after tomorrow.

We started with separate meetings and when the time comes, I do not rule out that the parties will meet.

Media question: In Moscow talks, General Khalifa Haftar left in the middle of the talks, and in Berlin conference there is a sort of ceasefire agreement, but he did not sign.  So, are you optimistic in these talks in Geneva to obtain sustainable ceasefire in Libya?

Salame: I think we should distinguish between the call for a truce sent by Presidents Erdogan and Putin on 8 January that was accepted on the 12th by both sides and implemented to a large measure – not entirely, not absolutely, there are violations of the truce – but it was accepted publicly by the two sides.  We want this truce to be implemented, we want to maintain it, we think it is a very positive development, and we thank the two countries for their achievement, in fact, on that.  Now, there was another thing, there were many attempts after that to sort of formalize this acceptance of the truce into something written.  And there was some reluctance, especially on the part of Mr. Haftar, that is true.  That is why these talks in Geneva are meant to listen carefully to the position of the two sides on what are the conditions for them to accept this translation of the truce into a permanent and lasting ceasefire.  Then, the two sides will accept what they would have negotiated calmly and quietly in Geneva in order to produce that agreement.

Salame: These talks here are mainly concerned with the military and security issues and in particular with the ceasefire.  There are three tracks, as I said, an economic and financial, which will meet in Cairo for the second time next Sunday, and there is a military and security one that is taking place here, dealing mainly with issues such as the arms embargo, the ceasefire, etc.  And there is also the political track that will start probably two weeks from now, that could take place also in Geneva.  So, I believe that the oil issue is sort of transversal to all these three tracks, but it is mainly an issue we are trying to push forward with the main parties themselves on the ground.  It needs to be raised with the parties on the ground.

We have taken as United Nations a very strong position for the non-involvement of oil issues in political disputes.  We have been helpful in solving some of the issues in the past related to oil production and export, especially with the Oil Crescent issue and with the El Sharara issue.  Every time it was not done in a matter of days, it took us some time and it took some kind of active international support for the United Nations to try and succeed in solving issues related to oil production and export.  I hope it will not take a long time before we come to this outcome in this new crisis and I call on countries to support the United Nations attempts to resume the production.  The production has been hit severely; in fact, now Libya is only producing offshore, which is 72,000 barrels a day, compared to 1.3 million barrels a day before the closure.  As you certainly know, export of oil and gas represent more than 90 per cent of all the revenues of the Libyan authorities.  Therefore, this situation is not sustainable, and I would be grateful if some of the largest countries in the world, who have been helping us in solving previous crises in oil production and export, do the same in this particular crisis.

Media question: I would simply like to ask your reaction to the allegations made by Emmanuel Macron against the Turkish President that the latter does not respect his word and continues to interfere in the affairs of Libya.  Is this also your feeling?  Do other actors continue to interfere even now in the Libyan affairs?

Salame: We have said, I have said, to the Security Council in our briefing last Thursday – that is, five days ago – I clearly said that we are worried because we consider that the quite clear resolutions taken in Berlin were not respected by the two parties to the conflict, and because we see that new mercenaries, new equipment, are arriving for both parties in Libya by air and by sea.  And we have asked the Security Council to accelerate the adoption of a resolution which would include the conclusions of Berlin and revitalize the Sanctions Committee and the UN Committee of Experts, which is tasked to follow on a daily basis not only the violations of the 1970 resolution on the arms embargo, but also the commitments taken by the various parties in Berlin.

Media question: You talked about the blockades, we will go back over, that is obviously an interest of ours to know about whether you see oil actually going to be flowing in the near future.  Do you see any hope for that happening?  And then, the second thing is, what is your response to the critics that say that this arms embargo is completely toothless because as you mentioned in French, if you could just maybe repeat some of that in English, that Libya is receiving weapons from all sides.

Salame: The arms embargo imposed in 2011 has been violated incessantly since that date.  The Berlin conference called for a better respect of this resolution.  What I told the Security Council is that this respect is not there, that we have evidence of new equipment but also new fighters, non-Libyan fighters, joining the two camps.  Therefore, we believe that the arms embargo is being violated by both parties, and therefore, by the countries who are violating as the source of these equipment or the source of these new fighters.  I hope that within the few days, the Security Council will come to its first resolution that reaffirms this and I also hope that those who are exporting these arms understand that there is already more than 20 million pieces of weapons in the country and that this is enough.  The country does not need new equipment.  But the best response to that is to have these talks, who are staring today, or we have started yesterday, succeed because if we come to a lasting ceasefire agreed upon by the two sides who are represented here in the very first meeting between the two sides ever, on the military level at least, then this would be the best response because at least the parties in Libya will not need any more weapons or any more fighters if they come to this agreement here in Geneva.

Media question: What impact do you expect the violations of the embargo (to have) on these talks?