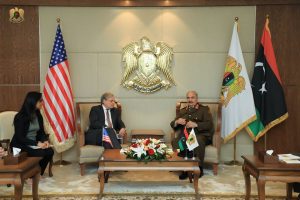 The U.S. Embassy in Tripoli (temporarily in Tunis) reported that U.S. Ambassador Norland paid his first ever visit to Libya today. However, this visit was to eastern Libya where he met Khalifa Haftar, commander of the Libyan National Army which is leading the attack on the capital Tripoli.

The embassy reported that Norland met Hafter ‘‘to reaffirm the importance of a negotiated settlement’’.

It said that the Ambassador ‘‘noted General Haftar’s stated commitment to a permanent ceasefire and reiterated the commitment of the Berlin participants to de-escalation, the arms embargo, and a political solution to the conflict’’.

The visit came a day after Mitiga airport was forced to shut down again after it was hit by projectiles and on the same day that Tripoli port was hit and as Ghassan Salame was holding a press conference in Geneva after the 5+5 Libya Military talks and celebrating the ‘‘fragile truce’’ in Tripoli.

The U.S. Embassy said that the ‘‘Ambassador looks forward to visiting Libya’s capital and meeting with Prime Minister Sarraj as soon as security conditions permit”.