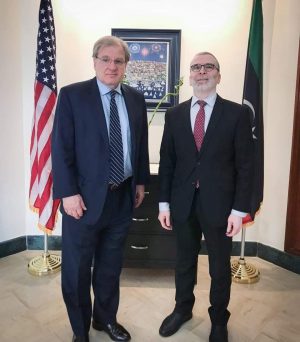 The NOC said the meeting discussed the economic and humanitarian impact of recent attacks on Tripoli port and the oil blockade.

It quoted Sanalla saying: “The events of the last few days and weeks means that the Libyan economy is sliding into a crisis and more Libyans are suffering. Yesterday’s (Tuesday’s) attack on the port of Tripoli is totally unacceptable. Hospitals, schools, and public services are experiencing power and fuel shortages due to the actions of those who seek to divide Libya.

“US Ambassador Norland and I agreed that the oil and gas sector must be allowed to operate for the benefit of all Libyans, as it represents the only income for state. That means ending the blockade, which is doing severe damage to the economy of country.”

NOC is doing everything possible to support a sustainable solution for an end to the violence that is tearing our country apart. The situation is becoming critical as vital public services are prevented from operating and people attempt to provoke an escalation of violence.”

The statement claimed that Ambassador Norland expressed the US Governments’ deep concern over the February 18, attacks against the commercial port of Tripoli, which only served to prevent crucial deliveries of fuel for civilian use and compound the suffering of the Libyan people.

Sanalla added, “I am hopeful that the US will continue their efforts to broker peace so that Libya’s economy can slowly rebuild and work towards prosperity for all Libyan people. We urgently need US leadership to help end the oil embargo, not just to avoid a financial crisis, but to prevent major damage to national infrastructure. Every day that passes with oil sitting in pipelines increases the damage to our infrastructure, increases the pollution risks from leaks and reduces our ability to quickly resume oil production”.