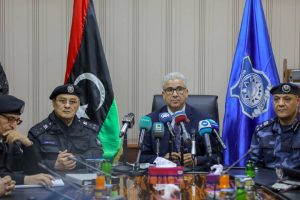 The Interior Minister of the internationally recognized Libyan government in Tripoli contradicted himself during a press conference on the issue of militias (Photo: MoI Tripoli).

The Minister of Interior for Libya’s internationally recognized government in Tripoli held a contradictory press conference in the capital on Sunday in which he attempted to distinguish between ‘‘militias’’ and ‘‘legitimate forces’’ while condemning a Tripoli militia that recently ‘‘kidnapped and extorted a number of security and police officers, who worked hard to establish security throughout the country’’. He also revealed conspiracies and huge corruption within his Ministry.

Addressing the much used concepts in the Libyan security context of ‘‘Militias’’, ‘‘Security Battalions’’ and ‘‘Supporting Force’’ – terms used often to describe security forces not under the control of the internationally recognized Libyan government – and what these concepts mean in Libya’s current circumstances, Bashagha said that the task of the Ministry of Interior is to refine, prepare, train and equip all fighters on the fronts to join within the Ministry’s components and bodies, so that the Ministry can dismantle the crime and melt it into the crucible of the Ministry of Interior.

He added that the ‘‘Supporting Forces’’ of his government and Operation Volcano of Anger (fighting the Khalifa Hafter forces) are ‘‘legitimate forces’’ that ‘‘volunteered’’ to defend the capital, ‘‘not militias’’, and that the door is open to them to join the (official) security services of the Ministry of Interior.

During the lengthy press conference, he nevertheless went on to admit that armed groups (militias) obstruct and extort the official security services in the capital Tripoli.

Continuing to undermine his earlier claims, Bashagha went on to say that the ‘‘Tripoli’s militias attack institutions and obstruct the government by using their powers as part of (official) security agencies. He then readily admitted that these militias ‘‘do not answer to the law or the instructions of the Attorney General”.

He characterised this as organized crime and said security forces/militias who commit these crimes will be pursued by the law.

He admitted that Libya’s intelligence service is under the control of a militia which is extorting the head of intelligence.

It will be recalled that Libyan media had made some unconfirmed reports that Al-Zubi had been detained by a Tripoli militia, accusing him of treason and of working for the Khalifa Hafter-led Libyan National Army (LNA).

Will not break the law

Bashagha said that his Ministry of the Interior will not break international law and would restore confidence between citizens and the security forces, which he said had led to a reduction in the crime rate thanks to the determination and resolve of all the Ministry of the Interior’s security services. He stressed the need for all members of his Ministry to fully carry out their tasks.

The Minister revealed the scale of the plots to which his Ministry has been exposed to by Haftar’s forces and the degree to which Hafter’s forces resort to intrigues and the conspiracies, especially after the entry of the Wagner and the Janjaweed mercenaries into the Tripoli war. Implying that there were some turncoats within his forces, he added that ‘‘the hearts of the shaky and cowardly have no place between us (his forces) and they are the ones who tried to tarnish the security and police forces’’

The conspiracies started after his Ministry had ‘‘reinforced the internal frontlines’’. Bashagha elaborated by admitting that some militia commanders had asked Italian intelligence to set up a meeting with the UAE. They did this, he explained, because they thought that Hafter would be victorious in his Tripoli war. After this meeting, both Misrata and Mitiga airport were the subject of airstrikes, he added.

However, he went on to pay tribute to the efforts of Tripoli’s security services and their success in securing the 17th February revolution celebrations

Hafter’s militias are bad too!

To keep the Tripoli militias in context, Bashagha pointed out in comparison that there are tribal and religious (Salafi/Madkhali) militias in eastern Libya which he said abducted and killed women.

Bashagha went on to reveal that there is huge financial corruption within the departments, components and organs of his Ministry, which he said makes it imperative for its officials to dry up all sources of corruption without fear or consideration for anything. These funds, he continued, must be invested in the Ministry’s human development, the development and construction of its organs and departments. He also revealed that his Ministry’s debts had reached LD 1.2 billion.

Today, in response to Bashagha’s reaching out for help from the international community, UNSMIL tweeted a statement in which it ‘‘noted with concern attempts to undermine the integrity of Libyan institutions, including the Ministry of Interior. We reiterate our full support for reform of the security sector and call for application of the law’’.