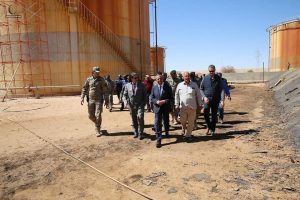 Libya’s eastern based government laid the foundation stone for the Kufra solar energy project to be implemented by the Chinese (Eastern Libyan Government).

The ‘‘Prime Minister’’ of Libya’s eastern-based ‘‘government’’, Abdullah Thinni laid the foundation stone for a 100-megawatt solar power project in Kufra municipality on Sunday. Kufra lies in the south eastern corner of Libya, over 1,000 km from Benghazi. The project is to be implemented by a Chinese company, the government said

The eastern government considers this a strategic project as part of the eastern based General Authority for Electricity and Renewable Energy’s 2030 vision to exploit alternative and clean energy, especially solar and wind energy.

The project will be built on an area of 200 hectares and is expected to solve the energy problems of the municipality of Kufra and adjacent areas.

It is expected to provide fuel and alleviate the problems of environmental pollution and supply the agricultural project as a first stage.

During his visit the Prime Minister also visited Kufra power station which has three units, each generating 25 MW in the summer peak period.

The eastern government had carried out general maintenance work on the first and second units while agreeing to supply a new unit with a production capacity of 36-40 MW, in addition to a 15 million-litre fuel tank and the maintenance of existing tanks.