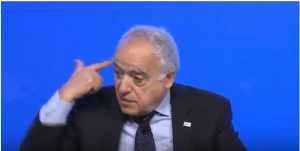 Ghassan Salame speaking in 2017 about creating the right conditions for elections in Libya said people must be able to vote freely without having a pistol held to their head (Photo archive: capture from ISPI video).

UNSMIL head Ghassan Salame has announced on his personal social media account that he has tendered his resignation to the UN Secretary General. The news was confirmed by the UN.

In his resignation tweet, Salame said ‘‘I have sought for two years and more to reunite Libyans and curb outside intervention and to preserve the unity of the country.

Today, the Berlin Summit was held, resolution 2510 was issued, and the Three Tracks were launched, despite the reluctance of some.

I admit that my health no longer allows for this pace of stress.

So, I asked the Secretary-General to relieve me of my mission in the hope of peace and stability for Libya.’’

Salame took up his UNSMIL post in July 2017, taking over from German Martin Kobler. A board member of the International Crisis Group, the International Peace Institute and various other organisations, Salamé was Lebanon’s culture minister from 2000 to 2003 and then served as a senior advisor to both Kofi Annan and Ban Ki-moon when they were UN secretary-generals. He was also political adviser to the UN mission in Iraq.  He was head of the Paris School of International Affairs when he took up his UNSMIL role.

Salame was understood to have been the 29th person to be offered the UNSMIL job. “No one want to do it,” explained one diplomatic source to Libya Herald at the time. “They see it as an impossible task.”

His four stage Action Plan which involved minor amendments to the LPA such as reducing the PC to three members, failed and had to be replaced in 2019 by his Three Track approach (Political. Military and Economic). However, it failed as it prerequired a truce or ceasefire – which he failed to obtain.

Fathi Bashagha, the Interior Minister of the internationally recognized Tripoli government tonight tweeted that he was sorry that Salame had resigned and that the resignation would make matters more difficult in Libya as it will be difficult to find another person who will accept the role of UNSMIL head.