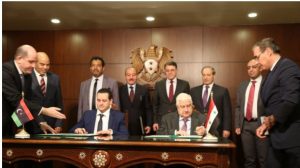 A high-level delegation from Libya’s eastern based ‘‘Government’’, which is not recognized by the international community, signed a Memorandum of Understanding with Syria on Sunday. The MoU prescribes ‘‘the reopening of diplomatic missions and coordinating the positions of the two countries in international forums’’. On Monday the delegation met with Syrian President Bashar Al-Assad and reopened Libya’s embassy in Damascus on Tuesday.

The meeting discussed bilateral relations between the two countries and ways to reactivate them in various fields in accordance with the aspirations of the two countries and the historical relations between them, as well as to ensure continuous coordination to face the similar pressures, terrorism and challenges that target them, ‘‘especially the Turkish aggression’’. The sovereignty, independence and ‘‘blatant’’ foreign interference in both countries’ internal affairs are blatant were also discussed.

The MoU included 46 joint cooperation agreements between the two countries which will take effect immediately which is expected to lead to a qualitative shift in all relations, the eastern Libyan Government reported. The delegation invited Syria to open its consulate in Benghazi.

Meanwhile, the Tripoli-based Libyan government issued a statement objecting to the illegal handover of its embassy building to the eastern Government.