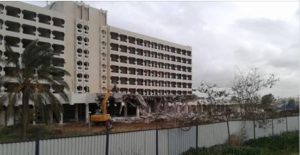 Benghazi’s Ouzu hotel is to be redeveloped and reopened after being closed for years (Photo: BCCI).

The Benghazi branch of the Libyan Social Security Fund has revealed its intention in the coming days to start the rehabilitation and redevelopment of the long closed Ouzu hotel, the Benghazi Chamber of Commerce and Industry reported yesterday.

The hotel is one of the landmark tourist hotels in Benghazi and is owned, like several other Libyan hotels, by the Libyan Social Security Fund.

The report says that the hotel will undergo a complete refurbishing and redevelopment and start a new phase of its life.

By announcing the move, the report says, the Social Security Fund’s is seeking to support its investment in the hotel considered as one of the vital buildings in the city of Benghazi.