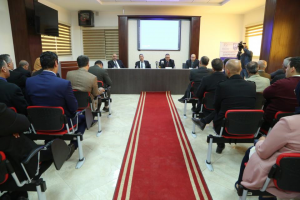 A workshop on risk and bank finance for SMEs made a number of recommendations (Photo: eastern CBL).

The University of Benghazi’s Finance and Banking Department of its Faculty of Economy and the eastern Central Bank of Libya held a workshop yesterday at the CBL in Benghazi on ‘‘The Impact of Risk and Reluctance of Commercial Banks to Finance SMEs’’. The Governor of the eastern CBL, Ali Hibri, was one of the speakers.

Participants discussed the importance of banking risks, as well as identifying the obstacles to financing SMEs in Libya, and proposals to address them from the point of view of commercial banks.

It was pointed out that many SMEs in Libya face many obstacles, including administrative, such as lack of interest in economic feasibility study, planning, lack of coordination with supervisory authorities, and technical constraints, such as the inability to use modern production methods and not pursuing innovation.

Participants discussed the fundamentals of risk management, the reluctance of commercial banks to finance SMEs and macroeconomic expectations at the regional and global level.

Technical solutions were also presented that help banks manage risk, such as ‘‘Straight Through Processing Solutions’’, which help banks reduce the risk of errors resulting from ‘‘non-processing operations’’.

Libya’s oil reserves, the need to diversify the economy and find alternative job creation sectors and sources of revenues, in addition to the imperative to overcome the risks, at the top of which is unemployment, and which can only be overcome through the equitable distribution of wealth, and support for small and medium-sized enterprises.

The important role of the media in spreading the culture of targeted implementation of SMEs.

The workshop noted that Libya has the potential for a diversified economy, but due to the lack of information, the lack of real guidance and an unfair distribution of wealth has created instability in the country. This has led to the waste of money in a non-purposeful manner, and the dramatic increase in the unemployment rate.

For things to return to normal, there must be a fair distribution of wealth, as well as job creation through the support of small and medium-sized enterprises and meaningful information.

The Governor of the eastern Central Bank of Libya also referred to the new Bank TV Channel, to be launched soon to spread the awareness, culture, and ways to set up SMEs as alternatives to government jobs.