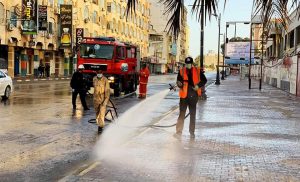 Empty Benghazi streets due to the Coronavirus curfew being disinfected (Photo: Benghazi Municipality).

The World Health Organization (WHO) announced yesterday that it has classified Libya among the high-risk countries in the region and asserted the importance of observing the preventive measures for protection against Coronavirus (Covid-19).

The announcement comes the day after Libya had announced 5 new cases of Covid-19, bringing the total to 8 since the first announced case on 24 March.

Domestically, a number of Municipalities called on the Tripoli government to take more effective action and provide the necessary equipment and supplies for their anti-Coronavirus efforts. Some have called for the resignation of the Tripoli-based Health Minister and his Deputy. They complained that the Ministry had failed to keep to its own plan promised to them at an earlier meeting in March. An online petition calling for their resignation is doing the rounds on Libyan social media. 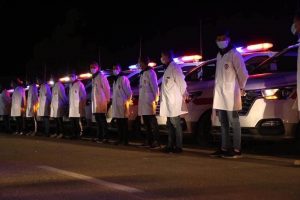 Meanwhile, following accusations that some medical staff were absconding and avoiding working with Coronavirus patients, Libya’s Medical Union has called on all hospitals to provide the necessary equipment, material and environment for its members. It called for the provision of isolation accommodation for medical staff and stated that medical staff should not be expected to put themselves at unnecessary risk due to lack of resources. 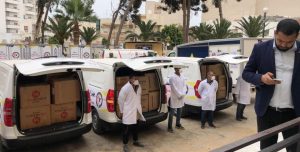 In response, the internationally recognized government made a point of publicizing footage of 50 sterilization and ambulance vehicles setting off yesterday from Mitiga Military Hospital, where the Tripoli authorities have set up a Coronavirus quarantine centre, to be handed over to various municipalities.

The authorities would not reveal which municipalities, which led to complaints that some municipalities were overlooked. The vehicles were also carrying shipments of medical equipment and supplies. Other vehicles were disinfection vehicles to help prepare hospitals to take on patients. The Health Ministry said that this was part of measures to curb the new Coronavirus. 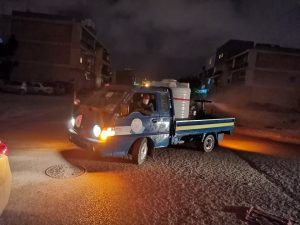 The government has also revealed the delivery of further supplies to its Misrata quarantine centre. It has also reported various anti-Coronavirus activities such as Municipalities spraying streets with disinfectant including at Mitiga airport in Tripoli and in Sebha.

The government has also been criticised for being quick to spend money and buy vehicles, ambulances and beds but slow on better services, communications and an integrated health and anti-Coronavirus policy. Municipalities complain the Libyan system is too centralized and unresponsive.

In related activities, Tripoli Municipality has revealed a list of doctors available for house calls. A prominent one doing the rounds is a site called ‘’Hello doctor’’ consisting of 38 doctors of all specializations. 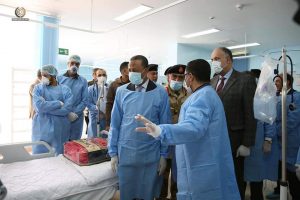 As mentioned in previous reports, delivery services are all enjoying a boom during these curfew times including deliveries for bread, foodstuffs, gas cylinders, diesel for generators and medicines from chemists.

On an optimistic note, Libya’s youth and NGOs have also answered the call to help the country out in its Coronavirus crisis. The Benghazi based, Made N Libya, started producing plastic face shields to help all those front liners to protect themselves during work.

In the same vein, the two young female owners of Fashion House, a fancy dress making company, switched production to medical protective clothing which it is distributing for free to medical staff. 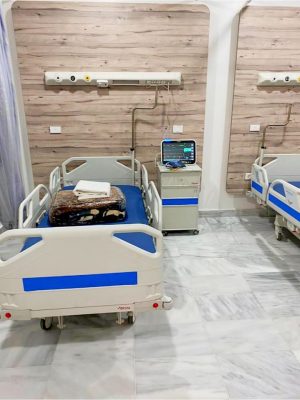 On international front, the U.S. Embassy for Libya announced on Saturday that it will provide US$ 6 million to help Libya response to the Covid-19 pandemic, in what it referred to as ‘‘additional humanitarian assistance’’.

It said these funds will help Libyan health officials to prevent the spread of the disease and to respond to those in need who’ve contracted the disease or who are most vulnerable to contracting the disease.

The statement said that the U.S. has invested more than $715 million in total assistance for Libya over the past 20 years, adding that this newly announced assistance joins decades of U.S. investments in Libya’s health sector and overall development, implemented primarily through USAID.