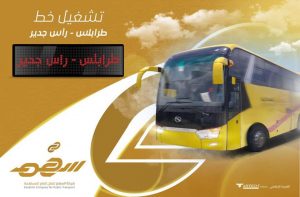 An express bus service was announced yesterday to and from Tripoli and the Ras Jdair Tunisian main border crossing by the Essahim / Asahem Company for Public Transport.

The daily service will commence from next Saturday 7 March from the car park opposite the disused Kabir/Grand hotel.

The first trip will leave Tripoli at 8 a.m and depart Ras Jdair at Ras Jdair at 11 a.m. Ticket will be LD 25 and with baggage allowance of 30 kg per person.

It will be recalled that Essahim / Asahem Company had launched a Tripoli-Misrata airport express shuttle service last September.

The company had signed a contract in March 2019 to import a possible total of 130 buses from China’s King Long company for a new public transport network in Tripoli. A first batch of 35 ‘‘City bus’’ had arrived from China at Tripoli port in August last year.

In December the company announced the first of its Tripoli routes, with further routes going into operation since.

Details of foreign consortium to invest and implement Tripoli metro, bus and infrastructure project and its financing revealed

U.S State Department briefing on Libya: The U.S is asking Khalifa Hafter to ‘‘suspend’’ his Tripoli offensive not withdraw or surrender