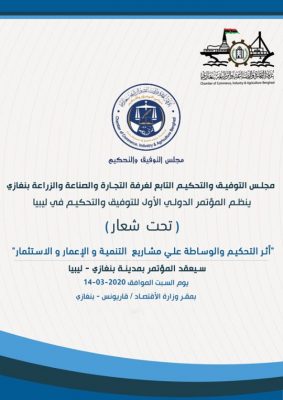 The Conciliation and Arbitration Council of the Benghazi Chamber of Commerce, Industry and Agriculture will hold what it refers to as the first international conference of conciliation and arbitration in Libya under the slogan “The impact of arbitration and mediation on development, construction and investment projects’’.

The conference will be held in Benghazi on Saturday, 14 March at the Ministry of Economy’s Garyounis Hall, Benghazi.

The Benghazi Chamber says the objectives of the conference are:

Some of the main themes of the conference include:

The conference will host a group of arbitrators in the field of conciliation and international arbitration from local experts and some Arab countries.