Former Economy Minister Ali Issawi during a visit to London in March this year (Photo:) 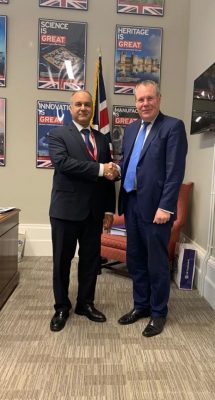 The Minister of Economy of the internationally recognized Libyan government based in Tripoli visited London where he met Britain’s Minister of State for Foreign Trade, Conner Burns last Thursday. The visit was part of the discussion on the development of economic relations between Libya and the United Kingdom, the Libyan Economy Ministry reported.